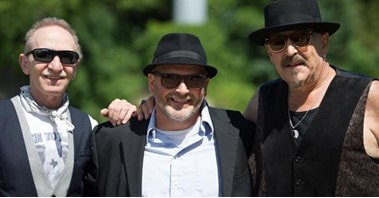 ​"An experience of a lifetime"
First of all, congratulations to the Vermont Blues Society's entry into the Blues Foundation, and, welcome to fellow and future members of the VBS. What follows will be my experience attending the International Blues Challenge in Memphis TN, in 2015.
I'll start with a quick set up. We were a power trio/Texas Blues style original material band called "Fade to Blues". Home base, Lake Placid, NY. Brian (BB) Ready on guitar/lead vocals, Dave Fischer on bass/vocals and me, (Jay Lamica) on the tubs. I had heard of BB Ready's Texas blues style through the grapevine... made the connection for a rehearsal with bassman Dave, and, it was on! This was Feb. 2014. By August, only 6 months later, we entered a regional blues band contest in the Albany area of New York by the Capital Region Blues Network. We were up against the best of their region, and on their playground, but pulled off the win with a tight show, the right look, attitude, and maybe even some musical talent. Oh yea, we won $500.
We were now on our way to the International Blues Challenge in Memphis TN in Jan. 2015 to represent the Capital District and our beloved Adirondack Mt region. First order of business: Raise some money to help pay for the trip! We had just released an all original material CD, so it made sense to have a CD release party with T's, CD's, etc. for sale at Delta Blue in Lake Placid. We then dedicated 6 well paying gigs to the fund as well. We had some jingle now....
Travel... One flew, two of us drove (rented car). Flyer paid for his own ticket! Haha! Rooms and reservations? Make them as soon as you can if you win. There are many hotels within 3-4 blocks of Beale St., and tons more about a mile away.
On to the nitty gritty..... You and your band. Understand that from the get-go, this is a talent competition! Some local and regional competitions may allow a popularity vote as part of the judging process, but not in Memphis. You will be judged by a panel in 5 catagorys. Blues content, instrumental talent, vocal talent, originality, and stage presence. You may be allowed to do a cover song or two in your local contests, but it's frowned upon in Memphis, remember that. You will have a set time limit to perform locally and at the IBC's. Our set time was 28 minutes. You will be timed. Don't go past the allotted time, or the points start going against you, and don't end your set way too early. After you've put your songlist together.... practice, practice, and practice more until get your show as tight and professional sounding as possible! And on time!
Now on to the competition itself. Realize that you will be surrounded by some of the finest unknown blues players in the country. Soak it up, feed on it, rub some elbows..... it's all about the experience and the thrill of being there! On that note, you're musicians representing your local Blues Society, it's an honor. Act like it, look like it!
Gear requirements in Memphis: All venues will have a full backline with guitar and bass amps, drum kit, and keyboard if needed. Guitar and bass players bring instruments and pedal boards only. Drummers can bring snare, pedal, cymbals, and sticks. Keyboard can be provided or bring your own. You will have 10 minutes to set up and tear down. The Blues Foundation does a tremendous job of coordinating this huge event for thousands of performers. Show em' some love while you're there.
One of the biggest highlights of attending the IBC's, aside from Graceland, Gus's fried chicken, and the Mississippi river, is the performers jam session at the Rum Boogie on Beale St. on Tuesday night, hosted by my good friend and fellow touring bluesman, Tas Cru and his band of Tortured Souls. There is a sign-up sheet. Get there early and sign up! You'll be matched with random players for a 3 song jam! It's a blast, but put your big boy pants on.... there'll be some serious players on stage with ya.
The bottom line is.....  put on the best show that you can, see the sites, enjoy the cuisine, make lifelong friends, and most importantly, have fun!